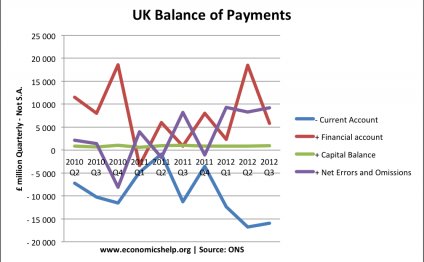 The balance of payments (BOP) is the method countries use to monitor all international monetary transactions at a specific period of time. Usually, the BOP is calculated every quarter and every calendar year. All trades conducted by both the private and public sectors are accounted for in the BOP in order to determine how much money is going in and out of a country. If a country has received money, this is known as a credit, and if a country has paid or given money, the transaction is counted as a debit. Theoretically, the BOP should be zero, meaning that assets (credits) and liabilities (debits) should balance, but in practice this is rarely the case. Thus, the BOP can tell the observer if a country has a deficit or a surplus and from which part of the economy the discrepancies are stemming.

The Balance of Payments Divided
The BOP is divided into three main categories: the current account, the capital account and the financial account. Within these three categories are sub-divisions, each of which accounts for a different type of international monetary transaction.

The Current Account
The current account is used to mark the inflow and outflow of goods and services into a country. Earnings on investments, both public and private, are also put into the current account.

Within the current account are credits and debits on the trade of merchandise, which includes goods such as raw materials and manufactured goods that are bought, sold or given away (possibly in the form of aid). Services refer to receipts from tourism, transportation (like the levy that must be paid in Egypt when a ship passes through the Suez Canal), engineering, business service fees (from lawyers or management consulting, for example) and royalties from patents and copyrights. When combined, goods and services together make up a country's balance of trade (BOT). The BOT is typically the biggest bulk of a country's balance of payments as it makes up total imports and exports. If a country has a balance of trade deficit, it imports more than it exports, and if it has a balance of trade surplus, it exports more than it imports.

Receipts from income-generating assets such as stocks (in the form of dividends) are also recorded in the current account. The last component of the current account is unilateral transfers. These are credits that are mostly worker's remittances, which are salaries sent back into the home country of a national working abroad, as well as foreign aid that is directly received.

The Capital Account
The capital account is where all international capital transfers are recorded. This refers to the acquisition or disposal of non-financial assets (for example, a physical asset such as land) and non-produced assets, which are needed for production but have not been produced, like a mine used for the extraction of diamonds.

The capital account is broken down into the monetary flows branching from debt forgiveness, the transfer of goods, and financial assets by migrants leaving or entering a country, the transfer of ownership on fixed assets (assets such as equipment used in the production process to generate income), the transfer of funds received to the sale or acquisition of fixed assets, gift and inheritance taxes, death levies and, finally, uninsured damage to fixed assets.

The Balancing Act
The current account should be balanced against the combined-capital and financial accounts; however, as mentioned above, this rarely happens. We should also note that, with fluctuating exchange rates, the change in the value of money can add to BOP discrepancies. When there is a deficit in the current account, which is a balance of trade deficit, the difference can be borrowed or funded by the capital account.

What are balance sheets and why are they important