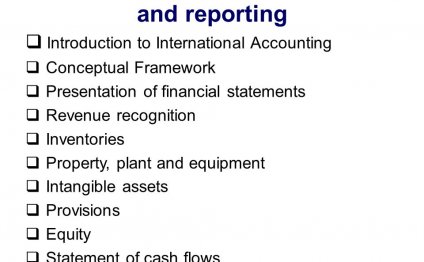 There are many accounting standards in the world, with each country using a version of their own generally accepted accounting principles, also known as GAAP. These allow firms to report their financial statements in accordance to the GAAP that applies to them. The complication lies within whether the firm does business in multiple countries. How can investors then deal with multiple standards, which ones are accurate, and how can corporations be compared based upon their financials? The answer to these questions lies within the adoption of the International Financial Reporting Standards, or IFRS, which is being developed and supported by the International Accounting Standards Board (IASB).

With more and more countries adopting the IFRS as their accounting standard, over 120 as of April 2011, investors and analysts should be well advised on how this transition affects company's reporting, and what it means moving forward. To do this, this article will look at the background of IFRS, the benefits, its goals, the fundamental differences between IFRS and U.S. GAAP, and go into a few of the major changes that occur within the various financial statements when converting to IFRS from U.S. GAAP.

SEE: Breaking Down the Balance Sheet

Background and Overview of IFRS
International Financial Reporting Standards (IFRS) is a set of international accounting standards that states how certain transactions and events should be reported in financial statements. It is based upon principles rather than hard set rules, which is in contrast to U.S. GAAP, a rules-based accounting standard. As a result of this fundamental difference, IFRS allows management to use greater discretion and flexibility when preparing a company's financials.

In recent years, there has been a trend towards a common globalized accounting standard with IFRS used in many parts of the world, including the European Union, Hong Kong, Australia, Russia and Singapore, among other nations. In January 2011, Canada officially adopted the IFRS standard, with more countries switching from their own accounting requirements to the IFRS standard. As of December 2012, the United States still operates under U.S. GAAP, so it remains to be seen if they will switch as well.

Benefits of IFRS
It is believed that IFRS, when adopted worldwide, will benefit investors and other users of financial statements by reducing the cost of investments and increasing the quality of the information provided. Additionally, investors will be more willing to provide financing with greater transparency among different firms' financial statements. Furthermore, multinational corporations serve to benefit the most from only needing to report to a single standard and, hence, can save money. It offers the major benefit where it is used in over 120 different countries, while U.S. GAAP is used only in one country.

The IASB, in regards to IFRS, has four stated goals:

3. When implementing global accounting standards, to take into account the needs of emerging markets

Impact of IFRS on Financial Statements

Differences in the Balance Sheet
A few of the differences on the balance sheet between U.S. GAAP and IFRS include the way inventory, property and equipment, and goodwill, is explained.

Property and Equipment
Also known as the fixed assets of the firm, property and equipment are reported at their initial cost less the accumulated depreciation. U.S. GAAP does not allow any upward adjustments of property and equipment, whereas under IFRS they can. This can have a profound impact on a firm's reporting. For example, if equipment is marked down, it results in a loss on a firm's income statement. However, if the asset is then marked back up under IFRS from an increase in value, then the adjustment is recorded as a gain, up to the initial cost. Any further upward adjustment will be reported directly to equity.

Goodwill
An intangible asset, goodwill is treated similarly to property and equipment. Just like with property and equipment, it is reported on the balance sheet at the initial cost less accumulated amortization. Any downward revaluation will cause a loss on the income statement and if it is marked up, which is not allowed under U.S. GAAP, and then a gain is recorded up to the initial cost amount. Any adjustment beyond that will be reported directly to equity.

Differences in the Income Statement
The criteria for revenue and revenue recognition under U.S. GAAP and IFRS are slightly different. The main philosophies are similar but U.S. GAAP provides more industry specific guidance than IFRS. A few of the differences lie within how cost of goods sold is determined, the operating expenses of the firm, and construction contracts.

Cost of Goods Sold
Since LIFO is not allowed under IFRS, LIFO firms have to convert their inventory into FIFO terms in the footnotes of the financials. This difference is known as the LIFO reserve, and is calculated between the COGS under LIFO and FIFO. The benefit in doing this is an increase in the comparability of LIFO and FIFO firms. However, since everything is moving towards IFRS, FIFO will be the standard moving forward if the U.S. passes the legislation.

If you re a CPA candidate, our Master s in Accounting & Financial Management program curriculum can put you at a…