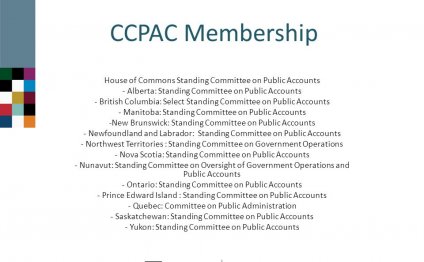 Public Accounts Committee (PAC) refers to a committee in the legislature that must study public audits, invite ministers, permanent secretaries or other ministry officials to the committee for questioning, and issue a report of their findings subsequent to a government budget audit. Typically, the government is required to report back to parliament on PAC recommendations within a specified period, usually two to six months. More often than not, opposition members chair PACs in the commonwealth. Based on their findings, PACs often make recommendations to government ministries requiring that they change certain policies and procedures to improve their operations.

The majority of legislatures descending from the British Parliament use public account committees to follow up on the findings of public audits. Since the creation of the Public Accounts Committee in the Gladstonian Reforms of1861, PACs have become ubiquitous throughout the Commonwealth. The tremendous expansion and scope of government and of state-owned enterprises during the second half of the 20th century made PACs, which are charged with overseeing government expenditures, even more important.

Public Accounts Committees face several challenges. For one, auditors general are often poorly funded, and their reports may be lengthy, complex, poorly organized, and difficult to understand. Funding and staff shortages mean that audit reports are often years behind, so ministry officials needed for questioning might have moved on. In many cases auditors general are appointed by the executive and so may have little incentive to uncover problems that could embarrass those who appointed them. Investigating report findings is time and labor intensive. Parliaments need professional staff, but they are often not available. Finally, governments are often not responsive to parliament, and there may be few tools at a parliament’s disposal to compel government compliance.

The Public Accounts Committee of the National Assembly ...

Journal of Modern Accounting and Auditing

Forensic accountants, investigative accountants or expert accountants may be involved in recovering proceeds of crime and…