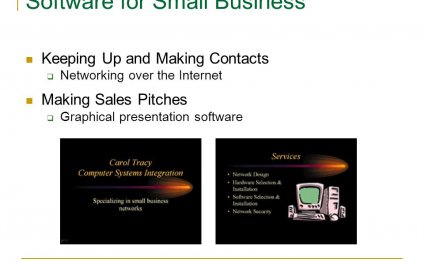 Marilyn points out that an income statement will show how profitable Direct Delivery has been during the time interval shown in the statement's heading. This period of time might be a week, a month, three months, five weeks, or a year—Joe can choose whatever time period he deems most useful.

The reporting of profitability involves two things: the amount that was earned (revenues) and the expenses necessary to earn the revenues. As you will see next, the term revenues is not the same as receipts, and the term expenses involves more than just writing a check to pay a bill.

The main revenues for Direct Delivery are the fees it earns for delivering parcels. Under the (as opposed to the less-preferred ), revenues are recorded when they are earned, not when the company receives the money. Recording revenues when they are earned is the result of one of the basic accounting principles known as the .

For example, if Joe delivers 1, 000 parcels in December for $4 per delivery, he has technically earned fees totalling $4, 000 for that month. He sends invoices to his clients for these fees and his terms require that his clients must pay by January 10. Even though his clients won't be paying Direct Delivery until January 10, the accrual basis of accounting requires that the $4, 000 be recorded as December revenues, since that is when the delivery work actually took place. After expenses are matched with these revenues, the income statement for December will show just how profitable the company was in delivering parcels in December.

When Joe receives the $4, 000 worth of payment checks from his customers on January 10, he will make an accounting entry to show the money was received. This $4, 000 of receipts will not be considered to be January revenues, since the revenues were already reported as revenues in December when they were earned. This $4, 000 of receipts will be recorded in January as a reduction in . (In December Joe had made an entry to Accounts Receivable and to .)

Now Marilyn turns to the second part of the income statement—expenses. The December income statement should show expenses incurred during December regardless of when the company actually paid for the expenses. For example, if Joe hires someone to help him with December deliveries and Joe agrees to pay him $500 on January 3, that $500 expense needs to be shown on the December income statement. The actual date that the $500 is paid out doesn't matter. What matters is when the work was done—when the expense was incurred—and in this case, the work was done in December. The $500 expense is counted as a December expense even though the money will not be paid out until January 3. The recording of expenses with the related revenues is associated with another basic accounting principle known as the .

How to prepare Financial statements Accounting?